No sooner than the finishing touches were in place at SOLANGE “NIKI” THOMPSON’s newest Asian-fusion concept, Café Chinois, plans were in the works to expand the restaurant into neighboring space at Fulton Station.

“We realized right away that the space was not large enough,” Thompson says.

Thompson announced earlier this year that after being approached by the owners of Southern Thai, who were looking to sell, she had accepted their offer. While Thompson had only just opened the doors to Indochine Express, an outpost of her flagship restaurant Indochine, she felt it was an opportunity she couldn’t refuse.

Thompson says she saw the new restaurant as a chance to share with Wilmington dishes from not only her native Vietnam, but China, Korea, and Thailand as well.

“The menu at Indochine has not changed in twenty-one years,” Thompson says. “My customers won’t allow it. But, Café Chinois is an opportunity to focus on other Southeast Asian specialties.”

Café Chinois is filled with artwork from Thompson’s own extensive collection. She admits she probably has enough art to fill five more restaurants – perhaps even enough to start a museum, which in fact is something she’s always dreamed of.

“I always wanted to open an Asian art museum because my dream is to leave a legacy of global knowledge to the children of Wilmington,” Thompson says.

During her early days in Wilmington when her children were young, Thompson taught classes on Asian customs and culture to children at the Cape Fear Museum.

It was around this time that Thompson found her way to the Copper Kitchen at The Cotton Exchange and befriended the shop’s owner, JULIA WATER. Thompson described Water as the mentor who opened doors for her by asking if she would be interested in hosting an Asian cooking class.

Cuisinart food processors had just hit the market, and Water was looking to promote them. So armed with a Cuisinart and her favorite cookbook, Thompson set out to teach Wilmington how to cook Asian cuisine.

Thompson would go on to host a regular live cooking segment on WECT’s long-running Jim Burns Show before opening her first restaurant, The Egg Roll Factory, in Carolina Beach.

Over the next twenty years, Thompson owned several Asian restaurants around town, as well as an antique shop on Front Street. 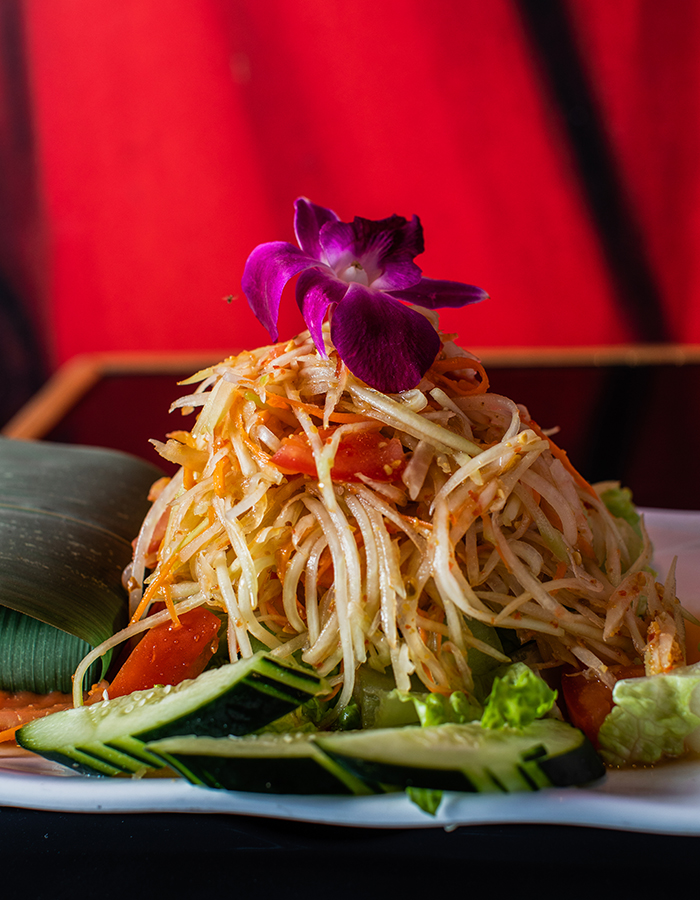 One day while riding down Market Street she noticed a soul food restaurant with unique architectural elements. She was drawn to the space, sensing it had great potential. Three months later she got the call that the building was hers if she wanted it.

“I felt it was meant to be,” Thompson says.

With the help of friends and artist Alana Solomon, Thompson opened the doors to Indochine after just one month of redesign in June of 2000.

“We opened the doors, and we’ve been steady ever since,” Thompson says. “I was blessed, and I was lucky.”

“It’s a 24/7 thing, and she’s constantly on,” Long says. “She’s fearless, but she also has a very diverse knowledge of everything from construction to art to food to business and employee relations. It’s not just luck … She’s had good luck, but her hard work is definitely behind it all.”

Thompson is also supported by her daughter MARIE BARTSCH and says her team is committed to keeping a close eye on operations at all three locations to make sure they maintain the consistency and level of service they are known for.

“Consistency of the food and service are what keep a restaurant going,” Thompson says. “But my employees are also my priority – making sure they are taken care of as well as the customers.”

Despite nearing retirement age, Thompson shows no sign of slowing down any time soon.

“I think if I slowed down, I would lose my mind,” she says. “I think when the fun stops then it’s time to let go, but right now I’m enjoying giving Wilmington a different outlook on Asian cuisine.”

Editor’s note: This is an excerpt from WILMA sister publication WilmingtonBiz Magazine’s new issue. To read more and for the rest of the issue, go to WilmingtonBizMagazine.com.