Housing built for women, by women 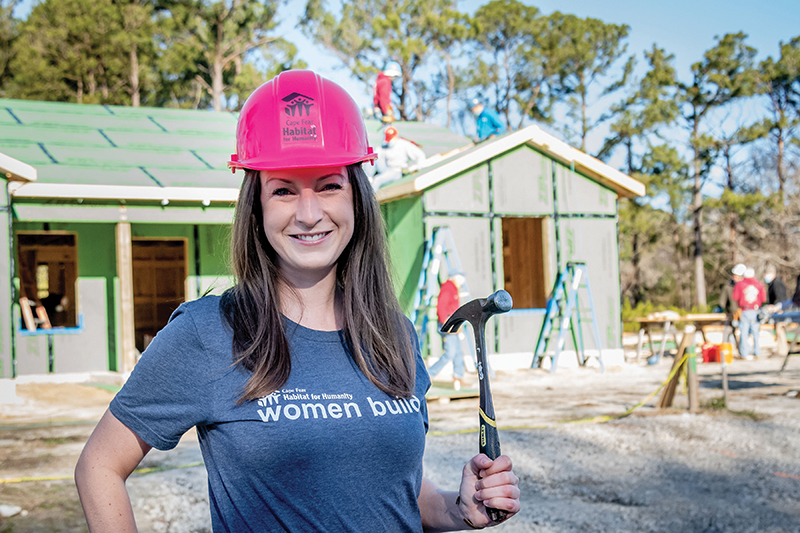 This May, teams of women will join forces to help two single moms achieve a great dream just in time for Mother’s Day: to own a home.

“Women are particularly empathic to the various barriers we experience in life,” says LAUREN MCKENZIE, currently the direc­tor of finance and operations for Cape Fear Habitat for Humanity. “This is about doing something for a member of our community.”

Each year, Cape Fear Habitat hosts the Women Build project to mobilize women throughout the region in partnership with a local female homebuyer, for whom the or­ganization provides access to an affordable mortgage.

“Like any Habitat for Humanity site, you don’t have to have any previous skills,” says McKenzie (shown left). “You can just learn something new and help us do what we do, which is build homes, community, and hope.”

In 2018, with the help of coworkers, McKenzie relaunched the Women Build project for Cape Fear Habitat.

“I just got really excited about it,” she says, “and I knew it was something we could get a lot of excitement around.”

The organization usually looks to build one home with a group of ten teams raising $50,000 each year. The 2020 Women Build, however, was canceled in the wake of the pandemic. So, McKenzie and others have doubled the goal to make up for last year’s loss, with strict COVID-19 boundaries in place. Indoor activities are limited to ten masked builders and twenty for outdoor ac­tivities.

“I think that we are fortunate because a lot of folks who participated in our first year are still there,” McKenzie says. “I’ve been pleasantly overwhelmed with a lot of interest in women coming together to take on new roles that may not have been in before.”

Although McKenzie cites a different el­ement as one of the most “powerful things about the Women Build.”

Cape Fear Habitat encourages folks to make a donation for the project in honor of a strong woman in their life. A $50 donation pays for 1 square foot of space, and, in ex­change, celebrates the named person with a special key that is literally placed inside the walls of one of the 2021 homes.

“In the walls, you’re seeing the women who are being honored and supported by this build,” McKenzie says. “It’s also very special for the homeowner as well – you can see the direct impact this will have on their life.”

Both homes will be built side by side as part of Cape Fear Habitat’s twenty-seven af­fordable home development in Ogden.

McKenzie and her female staff look for­ward to the build each year.

“We have female construction staff mem­bers,” McKenzie says, “but we have a lot of admin staff who are predominantly female.”

In fact, Cape Fear Habitat will soon be women-led by McKenzie herself, who will take over for Steve Spain as executive di­rector when he retires in April. This will be McKenzie’s first Women Build in the new head role.