Building a Peaceful Place Within

Psychologist Tara Ferguson creates a path of healing through therapy 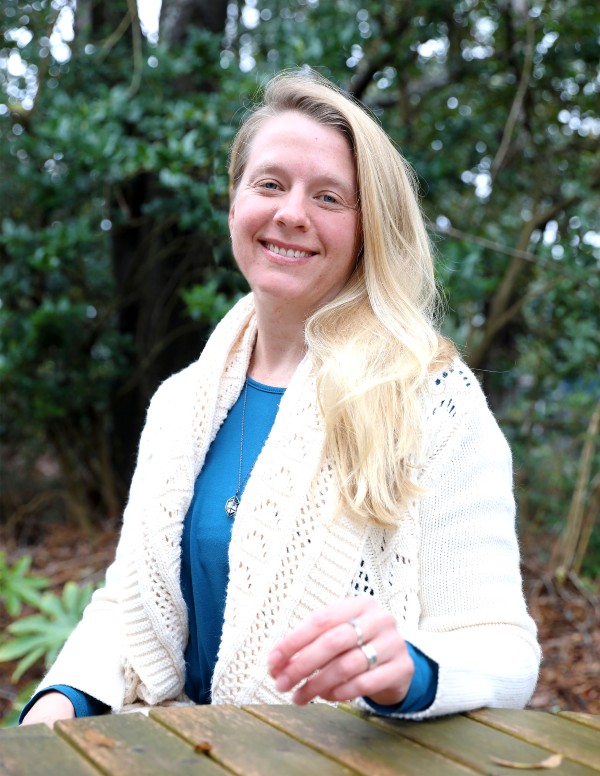 TARA FERGUSON, a licensed psychologist, is helping people find peace. Influenced as a teen, she recognized the powerful difference that communication, relationships, and coping skills made for her mother and ultimately her family.

Ferguson was born in Iowa. Her parents, generations of farmers, were the first to leave behind the farm, moving the family of four children to Colorado and Texas before settling in Black Mountain, North Carolina.

“I always had a fascination with human behavior. I remember walking around the house at six years old with a pen and notepad taking data on dreams, people’s moods and even the number of daily bathroom breaks,” she says laughing. “And by middle school, I knew I wanted to be a psychologist,” she recalls.

It was Ferguson’s adventurous spirit and love of the beach that later landed her at University of North Carolina Wilmington. First in her family to go to college, her path to becoming a licensed psychologist was a ten-year journey: bachelor’s degree in psychology; master’s and doctorate degrees in psychology from the University of Southern Mississippi; pre-doctoral internship at Texas A&M University counseling center; a year-long doctoral internship; and a year of post-doctoral supervision. Plus, professional practice exams along the way.

Ferguson assumed she would start her career in a counseling center with private practice as a long-term goal. But there were no jobs in 2008 when she graduated due to the housing crisis and the recession.

“So, I dove straight into private practice, getting my start at Integrated Therapy Associates in Wilmington. The owner mentored me in running a business, something I still pass along to my associates today,” she says.

In 2015, Ferguson opened her own practice where her specialties include trauma therapy; post-traumatic stress disorder; and working with survivors of abuse and other dysfunctional family dynamics. Her practice also treats anxiety disorders, eating disorders, relationship issues, and women’s issues, a specialty that was cultivated during a clinical experience at The Women’s Center, a residential program for substance abuse and eating disorders in Hattiesburg, Mississippi.

In 2019, Ferguson opened a group practice called Place of Peace. One-year prior, she had purchased a building that needed complete renovation. Taking on the role of contractor, she says, “I had zero experience in this kind of work. I learned to be persistent. But it was the relationships with people that really got things done. I never dreamed I would form a group practice. Creating Place of Peace is my proudest moment in my career so far.”

Place of Peace offers a range of specialties including play therapy for children and training for parents; eye movement desensitization and reprocessing and cognitive processing therapy for trauma and post-traumatic stress disorder; substance use treatment; couple’s therapy; obsessive-compulsive disorder treatment; mindfulness and meditation; and cognitive-behavioral therapy for anxiety and depression.

Ferguson’s team between her two locations includes eight therapists plus herself and three administrative staff.

“We consider ourselves one big group, two locations. Being a part of others’ journey toward healing is an absolute honor,” Ferguson says. “Clients and therapists become close allies and we get to know each other well.”

The healing process starts with education on symptoms, skills for ameliorating those symptoms and discussions about the underlying issues. She says, “The patient blooms through this process which often includes meditation and trauma therapy. We are so proud of what we accomplish.”

Ferguson identifies today’s biggest challenges as stress and anxiety caused by people’s relationship with social media and a tendency toward overthinking. It is intensified by COVID-19.

“Place of Peace is helping people turn it off when they need a break. It’s for anyone in the community who would like to find a peaceful place inside themselves, a retreat in a moment of chaos or at the end of a stressful day,” she says.

Ferguson’s one big hope is “to create a centered and peaceful place within that we can share with the world. If we all felt at peace, the world would be peaceful too.”

Ferguson spends her free time with her husband, also a Wilmington business owner whom she met in college, and their spirited eight-year-old son. She loves interior decorating; gardening; arts and crafts; and animals. She has five hermit crabs, and she is often found running or doing yoga, meditating or just taking a long, relaxing bath.

“Be true to yourself, your hunches and your dreams. They will take you exactly where you can be best used by society,” she says. “That, in turn, will give you back the success, confidence and ability to create even more than you ever dreamed.”