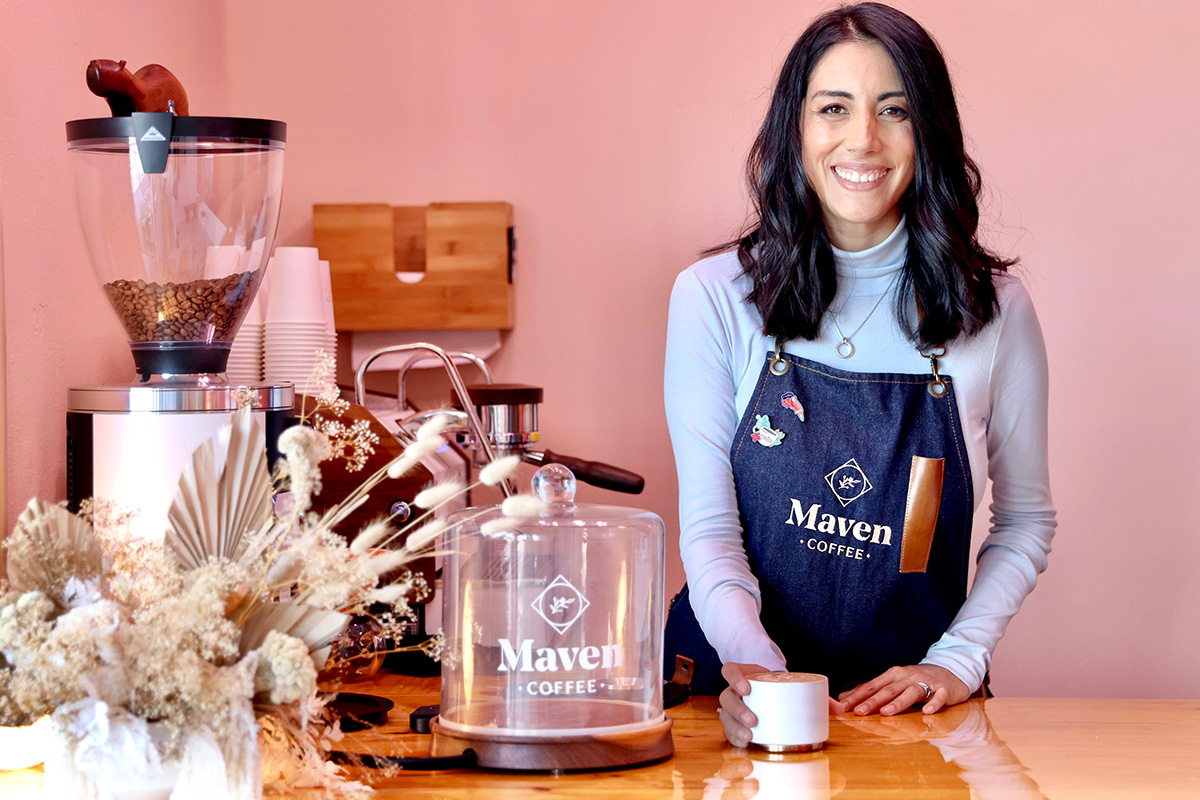 DIANA NINO and her husband, NICO, want to challenge the way people drink coffee. Instead of gulping down a cup on the go, the Maven Coffee owners want to provide an experience to enjoy.

Maven Coffee is a specialty brewer that sources microlots from growers in Colombia, to offer a variety of specialty coffees as well as specialty equipment to their customers.

While living in Bogota, Diana Nino had worked for the “best specialty roaster in Colombia.” She managed their coffee shops, trained baristas in customer service, and helped set up franchises.

“I knew in that moment that Nico had an idea of a coffee business. The vision was in his brain,” she says. “And I had been learning about everything about how to do a coffee shop and do it on a big scale. I had learned a lot from there, but the idea to create something that is yours is more exciting.”

When the couple moved to Wilmington, Maven Coffee was born. They started the company with the intention of only selling the “best equipment and beans,” but the idea continued to evolve until they decided to “give people the opportunity to have the experience,” Nico Nino says.

They began doing pop-up shops, but the pandemic slowed down events, so they decided to open their own space at 3816 Oleander Drive.

Seeing a need, they opened in the front space of their coworking office space.

“It was the best idea,” Diana Nino says. “We opened when everyone was closing, but people stayed because they wanted to be educated on how to prepare a good cup of coffee.”

Now Maven Coffee is able to share the coffee, as well as teas and chocolate for flavoring, that the couple sources from small farms with whom they’ve established relationships.

“Our relationships – that’s the best thing about this. Traceability is key. It is high quality, but there are beautiful stories behind the coffee,” Nico Nino shares.

Their espresso bar, sophisticated but cozy, welcomes customers to learn about the coffees available to them and experience the unique flavors that Diana and Nico personally create.

“It is a showroom rather than a traditional mom-and-pop shop,” Nico Nino says. “You see these cooking shows where all you can do is salivate, so we wanted to have a coffee shop where you can have the experience and give them the space to enjoy it.”

“Like a wine tasting, there are a lot of varieties, a lot of aromas, a lot of flavors of coffee, and we educate people on how to identify the best coffee available,” Diana Nino says.

Coffee cuppings are available for groups of up to ten people. Barista training is also offered.

Specialty drinks include the Red Velvet Latte and Chocolate Cherry Truffle Latte. Seasonal drinks reflect flavors of the time of year, such as their Campfire Latte, the Tiramisu Latte, and The Manhattan for the colder months.

When the ideas come to Diana, she shares them with Nico, and he brings them to fruition.

“He calibrates the idea to perfection, so you don’t lose the flavor of the coffee,” she says.

Diana Nino, who has a degree in economics, handles the company’s finances and management, but her favorite part of the business is sharing the coffee experience with her customers.

“My most favorite thing is to be serving coffee with the customers,” she says. “The experience is so different. When they say, ‘It’s the best coffee I’ve ever had,’ I just love it.”

The couple has a 19-month-old named Yohanan, with another baby on the way. And as their family grows, so does Maven Coffee.

“Business is growing at a good pace; it is growing in a way that we can handle,” Diana Nino says. “Ninety percent of customers that come in, stay regulars.”

By the end of the year, she says, they plan to open another Maven Coffee location, and in time, they look forward to having “the espresso showroom replicated in different parts of the city.” The goal is to make sure customers are “always going to have the best coffee cup possible.”

A Maven Coffee Cart also is available for weddings and events and is often on hand at local marketplaces around town. Bags of their microlot coffees are available on their website and can be shipped throughout the United States with a step-by-step brewing guide.

“We like to say, ‘This is not a business to compete, but a passion to share,’” Diana Nino says. “We love people, and we love to serve people. We were born to do that.”

Malama: To Take Care Of