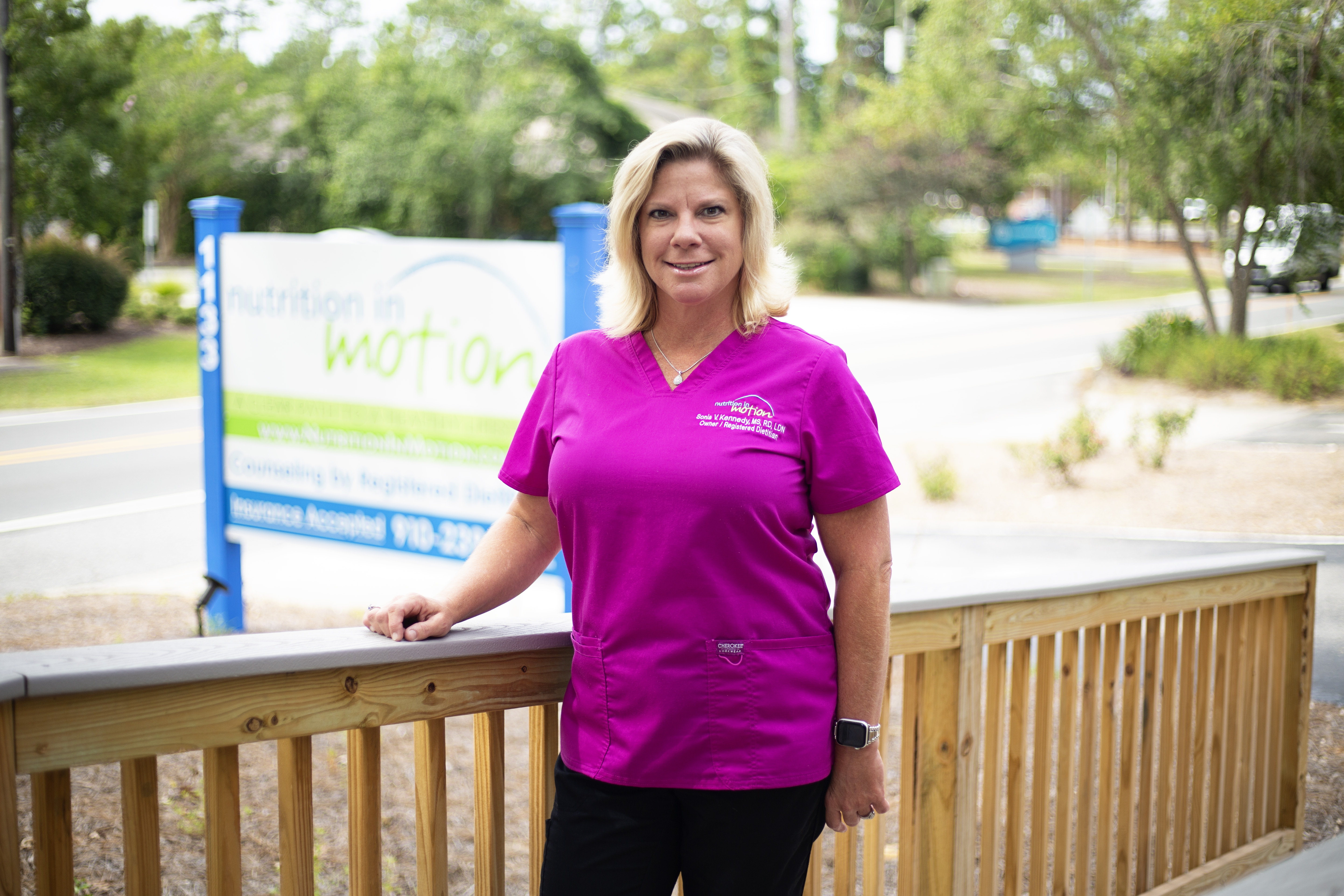 SONIA VIEREGGE KENNEDY always knew she wanted to help people and probably work in the medical field. She considered nursing but feared her “tender heart” would be problematic when it came to addressing people dying or other difficult situations.

When she was enrolling in courses at Eastern Carolina University (ECU), she talked to a registration coordinator. She explained she wanted to be a physical education teacher, adding she had a family history of diabetes, cardiac issues, and weight problems and she wanted to be able to help people with similar issues. This was in the early 1990s and the coordinator mentioned a program in nutrition they offered. The more he described it, the more her future came into focus.

Today Vieregge Kennedy, a registered dietitian nutritionist and licensed dietitian/nutritionist, has a master’s in Nutrition and Dietetics from ECU. Ten years ago, after having gained clinical knowledge by working in hospitals and marketing know-how by selling for a nutritional line, including baby formula, she opened Nutrition in Motion. The business provides nutritional counseling, corporate wellness, bariatric counseling, and more.

Aside from using her knowledge to open the business and working for herself, Vieregge Kennedy says she wanted to expand the business, “to be able to reach more people and help more people realize that what they eat is affecting the rest of their life. Also, to be able to get the message across to people that you don’t have to completely deny yourself everything that is enjoyable when it comes to eating.”

She’s experienced a lot of business growth. For the first couple of years, she was the sole dietitian. By the fifth year in operation, she had added two more. Now there are eight. Newly hired dietitians work with her for two weeks to ensure they provide consistent care and messages. She’s got locations in Wilmington, Jacksonville, and Shallotte. The Wilmington office schedules the appointments and handles the insurance calls.

One of her biggest learning curves, she said, was how much there is to learn about insurance companies and what they will allow to be billed for. This resulted in the need for her to have a much larger support staff, currently at four, than she thought she’d need. In addition to scheduling appointments and addressing insurance issues, the front office also works on customer retention.

“But we’re really making sure that we’re giving a clear message to people,” she says. “We’re not the company who says, ‘It might be covered, it might not. I’ll send you a bill.’ … We will stay on the phone with the insurance company for hours to give the right answer.”

There’s been an increase in insurance companies allowing payment for dietitian services. Nationally, health and insurance professionals realize prevention can reduce the number of illnesses such as diabetes and other diseases impacted by what people eat.

For instance, according to the American Diabetes Association, 34.2 million Americans, or 10.5% of the population, had diabetes in 2018.

The people who come to Nutrition in Motion do so for a variety of reasons. A good number of them are trying to manage diabetes and some come to learn how to eat well to lose weight. They also come to address issues such as hypertension, food allergies, and high cholesterol. Some simply come to take care of themselves preventatively.

One of the most important lessons Vieregge Kennedy has learned is resiliency — both hers, which helped her not give up when things got tough, as well as her patients, who, with the dietitians’ help, empower themselves with the knowledge to improve their lives and health.

While the COVID-19 pandemic certainly had an impact on Nutrition in Motion’s business for about six to eight weeks — “We got hit pretty hard,” she says— they never shut down and immediately pivoted to telehealth for those who wanted it and were able to do it. But since they were essential staff, they implemented all the requirements for things such as social distancing and wearing a mask so staff was able to see people in person, too. Business is now up to about 90% of where it should be.

“It’s like a little dream come true,” she says of her business.