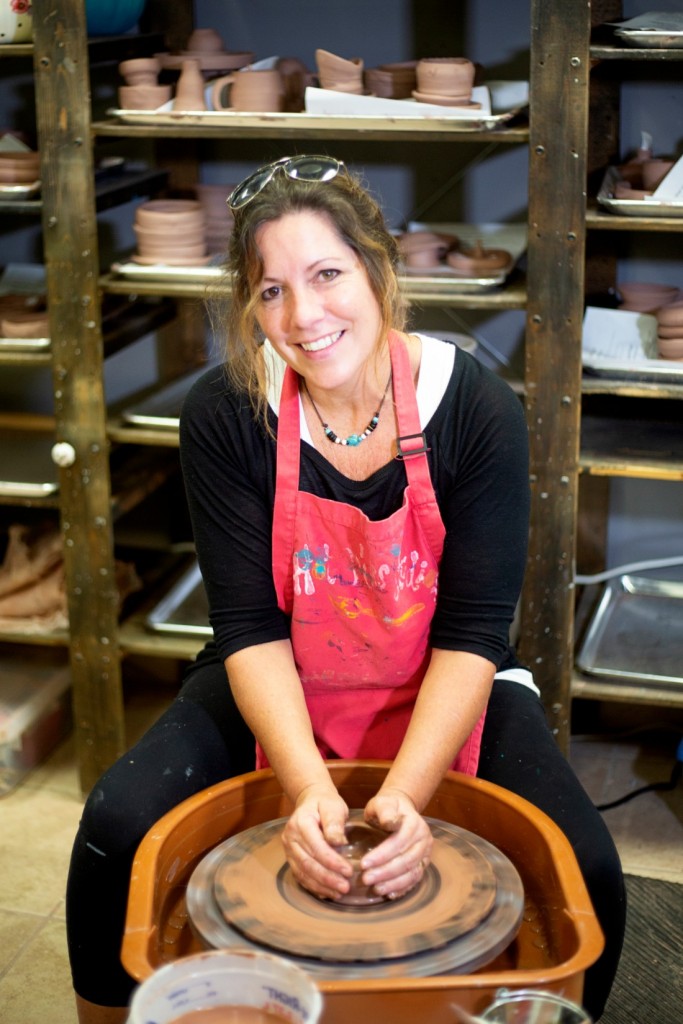 When ANDREA JACQUOT’s mother, KAREN VOSE, retired to the Wilmington area in 2012, the two decided to open a ceramic studio in Hampstead, as Vose and a friend had owned one in Connecticut.

Six months after opening, Vose was diagnosed with cancer. “We decided to stay open and try to make it,” Jacquot says.

Sadly, Vose passed away a year after her diagnosis. Jacquot could have, understandably, closed the studio. She lost her mother and was raising five children, all while running a small business. But those factors were motivation to keep it open.

Years later, and despite the current coronavirus pandemic, she has reinvented Hot Mess Studios. Jacquot closed the Hampstead studio and opened two smaller locations – one in Surf City and the other on Market Street Wilmington.

Jacquot hired local potter EMILY ANDRES to teach classes in Wilmington, while she and a friend run the Surf City site. Hot Mess Studios shares its Wilmington location with BonBon Crafting Parties. Jacquot and BonBon owner JEANNE KING are able to save on rent and offer support to each other.

After years of running the studio, Jacquot is ready to turn a chapter and is passing on the business to best friend and local business owner ANGELA CRAIN.

“She currently owns a business in Surf City with her husband and has decided to take Hot Mess over as her own,” Jacquot says. “I couldn’t be happier and she is going to do a fantastic job, bringing new energy and ideas to our classic studio.”

In addition to teaching how to throw clay on the pottery wheel and glaze finished pieces, Hot Mess Studios has been offering Kids Clay Labs. These three-hour workshops are for parents who are homeschooling or for kids who need some time away from the virtual learning environment.

Sip and Spin offers a night out for adults to socialize safely in small groups.

Private lessons on the pottery wheel are also available. Painting has been added to the class offerings at Hot Mess Studios, as customers wanted to craft more.

“Private party beach painting in Surf City is a great way to get outside and get creative,” Jacquot says. “We also offer classes in canvas, resin and acrylic pour painting.”

Each studio is running at half the normal capacity and masks and reservations are required. Contactless pick up of fired clay pieces has also been established.

For Jacquot, operating Hot Mess Studios has been a labor of love.

“If it was about money, I would have shut down a long time ago,” she says. “I don’t think people always realize what goes on behind the scenes of a small business.”

Operating at half capacity is only paying for a small staff, power, and the internet. Her landlords are being flexible with rent payments.

“But you love it more than you don’t,” Jacquot says.

She says art is a stress reliever – for her and her customers.

“The pottery wheel is soothing,” she says. Jacquot remembers a Marine and his wife taking a pottery class at the studio. “He was suffering from PTSD and after the class, he said, ‘I just didn’t think about anything. I was so relaxed.’ I think it was good therapy for him.”