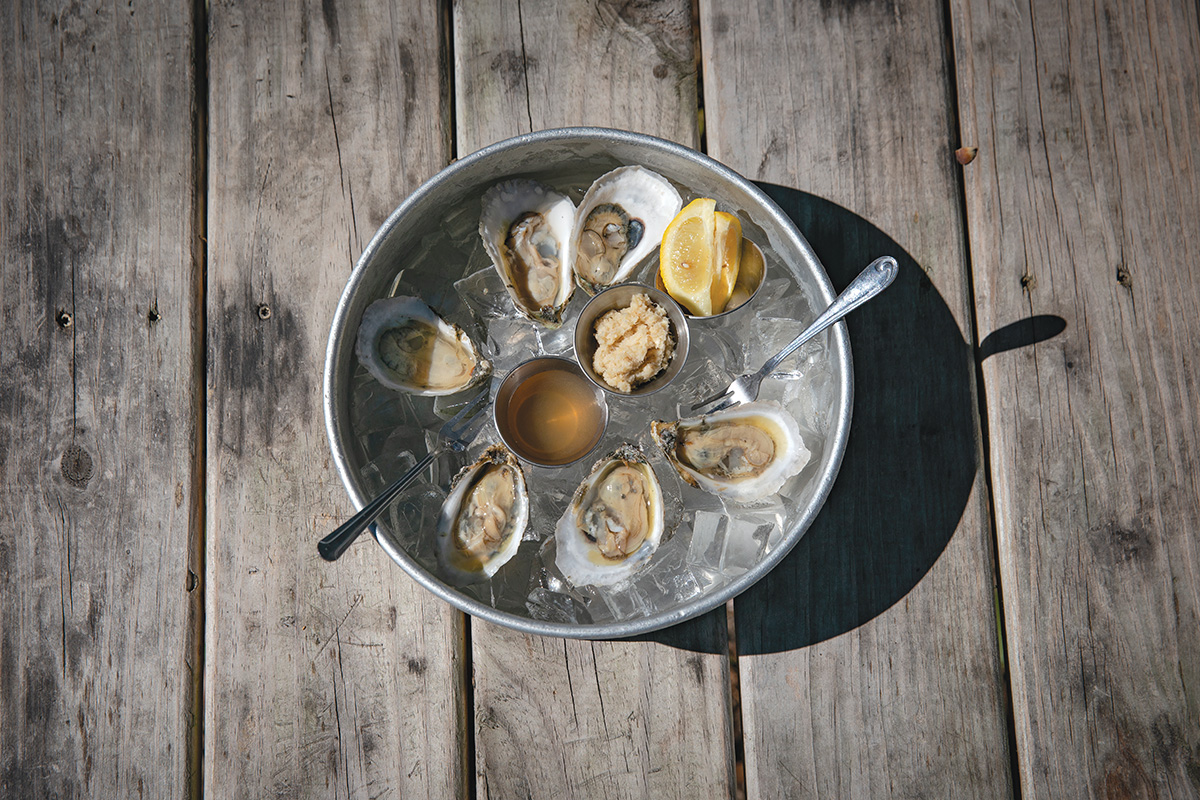 October 15 marked the start of a shucking good time in Southeastern North Carolina: wild oyster season. The state’s public waters opened for cultivation of the beloved bivalve that day, and wild oysters began popping up on area restaurant menus and in seafood markets.

Wild or farmed, oysters absorb the flavors of the water where they grow, and coastal North Carolina’s mix of salty and fresh waters provides a particularly rich environment for them. DEAN NEFF, owner of Seabird and a semifinalist chef in the James Beard Awards, has heard the area called the Napa Valley of oysters. Indeed, Neff compares experiencing the differences in local oysters to wine.

“It’s kind of like experiencing wine,” Neff says. “It’s all about seasons, the farming practices. All of that changes everything about the taste of oyster, the meatiness of it. There’s a lot to it.”

Merroir is the term among oyster fans to describe how oysters take on the flavor profile and qualities of the waters where they were grown, according to ERIN FLECKENSTEIN, coastal scientist with the North Carolina Coastal Federation. Fleckenstein points out that oysters are more than a tasty treat for coastal residents, though. They are a crucial feature in North Carolina’s coastal ecosystem by providing habitat for fish and filtering sediments and algae from the water.

While the state’s wild oyster population has declined, the rise of oyster farming has ensured that the mighty mollusk continues to serve these functions along the coast as well as shoring up the supply of local oysters for area restaurants.

“People really love them and have a deep affinity for them, so our oyster farming industry has helped to fill that demand,” Fleckenstein says.

For those eager to enjoy the bounty of the season, Wilmington restaurants offer a variety of options that include local farmed oysters as well as wild varieties once public waters open for harvest.

Wrightsville Beach Brewery offers oysters from two local farms year-round, including green gill oysters. The oysters are harder to find around Wilmington, according to general manager KEITH SINCAVAGE, but present a special experience for guests.

“The flavor is particularly briny, and they’re pretty,” Sincavage says. “They’re really cool to look at.”

Another option is buying wild oysters from a local seafood market to enjoy at home.

“On Saturdays, we start washing oysters at 8 a.m., so the earlier, the better. If you get here around noon or so, you’re usually standing in line,” Flowers says, adding that oysters usually sell out on Saturday afternoons.

At seafood markets, oysters are sold by volume instead of amount, which can be tricky for those new to buying oysters. A peck or quarter-bushel is typically the smallest volume sold, with half-bushel and bushel options also available. Flowers recommends a peck for two people.

“We have single selects, which are the biggest and meatiest oysters. Then we have standards, which are a little bit smaller single oysters,” Oracion says. “Cluster oysters tend to be the saltiest, but they’re all clustered up, so you’ve got to do a bit more work but they’re pretty good, too.”

Here are some other ways to experience oyster season this year.

Tours depart via boat from Epic Excursions in Wrightsville Beach and travel to Middle Sound Mariculture, where owner James Hargrove leads a guided tour of the oyster farm and shares insight into oyster farming practices. The next two hours take place at Masonboro Island, where raw and steamed oysters along with complimentary wine are served. Guests can also bring their own beverages to enjoy on the beach. Tickets cost $150 per person. Owner Kristi Balding says additional tours will likely become available later in November.

Family Promise of Lower Cape Fear will host an intimate evening of dinner and drinks among the chickens, alpaca, and herding dogs at White Feather Farm to raise money to benefit families experiencing homelessness or domestic violence. Dinner includes oysters from Hold Fast Oyster Co. and entrees by Sawmill Café and Catering with appetizers and dessert from Spoonfed Kitchen and Bakeshop. Mister Bartender will pour signature cocktails crafted with spirits from End of Days Distillery, which along with beer and wine, are included with purchase of tickets. Live music by Tideline String Band will provide entertainment, as will a silent auction. Tickets are $125 per person.

Rain or shine, the American Cancer Society is hosting its inaugural Shuck Cancer Oyster Roast beneath a tent in the Bluewater Waterfront Grill parking lot. Although this is the first time the event will take place in Wilmington, other chapters of the American Cancer Society have hosted similar events. Dinner includes steamed oysters in addition to small plated dishes from Bluewater, Carolina Ale House, Hops Supply Co., and Oceanic. The small plates will include two oyster-based dishes and two non-seafood dishes. Each ticket comes with two complimentary drinks. Entertainment will include live music and a silent auction. Tickets are $70.