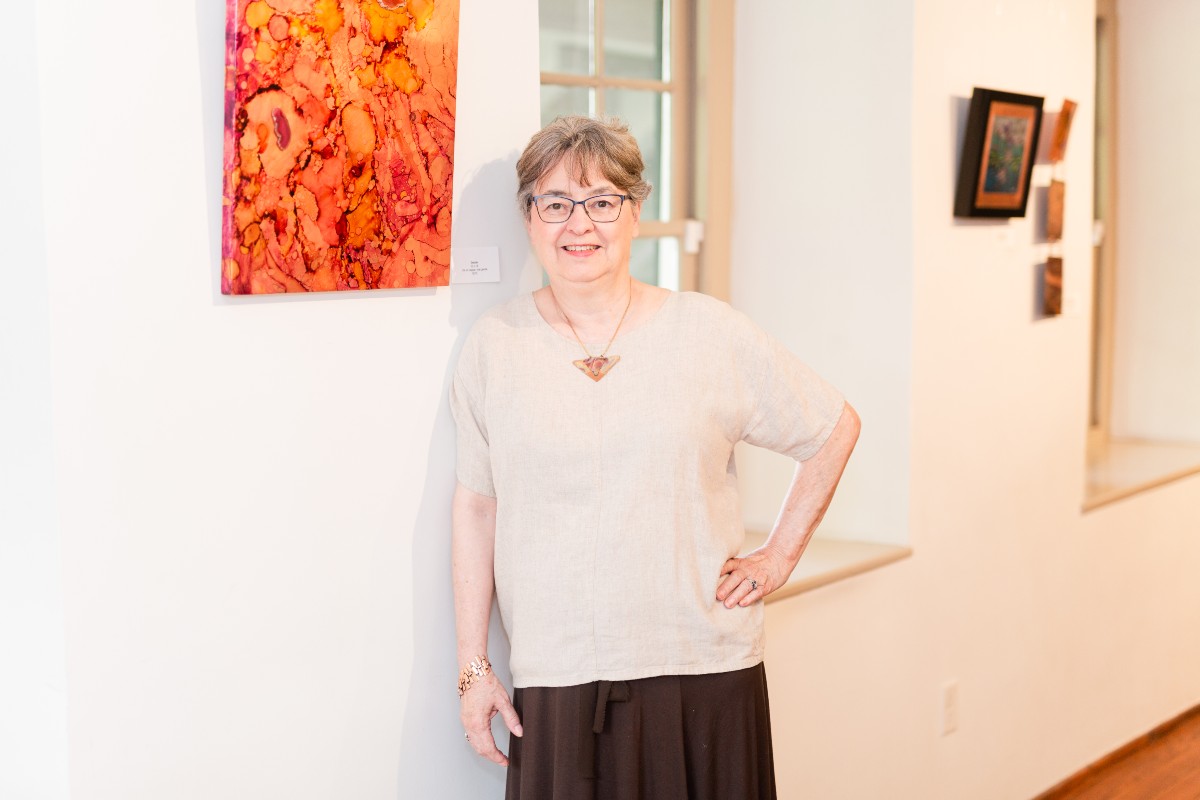 SARAH SHEFFIELD is an artist who, like her art mediums, has gone through many iterations of her own design. Her latest exhibit at the Burgwin-Wright House reflects a diverse collection of mediums that celebrates the natural world.

Growing up surrounded by a family of artists, Sheffield felt confident that art was a career possibility. Despite a short deviation elsewhere, Sheffield’s focus has been on art as a graphic design business owner, an art teacher, and cultural arts supervisor for the Town of Cary.

“Like many artists, I grew up around it. My mother, father, grandfather, and uncle were in various art fields. I temporarily went into social services until I realized I wasn’t cut out for that,” Sheffield says. “I really wanted to make things with my hands. Knowing these people, I knew art as a career was a possibility. I knew aptitude was only a part of it, that it was something to be learned and trained. I had a foundation.”

Sheffield attributes her success in each of these areas to organization, safety, and working well with others.

“What runs through all three experiences is being organized, being a problem solver, being safety conscious, and dealing effectively with people,” Sheffield explains. “I was able to develop these skills gradually first with single clients with my art business, then in teaching small classes in city art centers, then broadly in organizing city-wide events and programs. I think the creative life is an excellent way to develop these skills.”

Now a full-time artist who works with copper and aluminum to create wall hangings that are etched and flame-worked, Sheffield has worked with many other mediums and continues to develop her repertoire.

“I tried many other materials along the way, bookbinding, calligraphy, paper-making, mosaics, stained glass, pottery, jewelry, and more, where I learned many skills and acquired design experience. I learned I really liked to work deliberately and be able to predict the results,” Sheffield explains.

Sheffield switched to metal in the last few years after NAN POPE at the Cameron Art Museum invited her to participate in the Illumination lantern exhibit. She began to think about three-dimensional art and decided to make images on metal surfaces. She had been painting on copper, and it launched her into etching and flame torching on copper.

Sheffield’s current exhibit represents the great outdoors reflecting all the ways that metal can be used as art.

“My years painting outdoors gave me an appreciation for the landscape, so I depict mostly plants, animals, and natural features in simple graphic etchings,” Sheffield says. “In the current exhibit, I wanted to show many different things one could do with metal. This exhibit shows a lot of diversity.”

Currently, Sheffield is thrilled that Water + Color Gallery in Riverlights is presenting her metal works and she plans to do some demos or workshops there.

In her spare time Sheffield enjoys doing art with her two grandchildren.

“My only motto: Safe and fun!”

Sheffield’s artworks will be on exhibit at the Burgwin-Wright House through May 22.