Southport classes provide a creative and social outlet for many 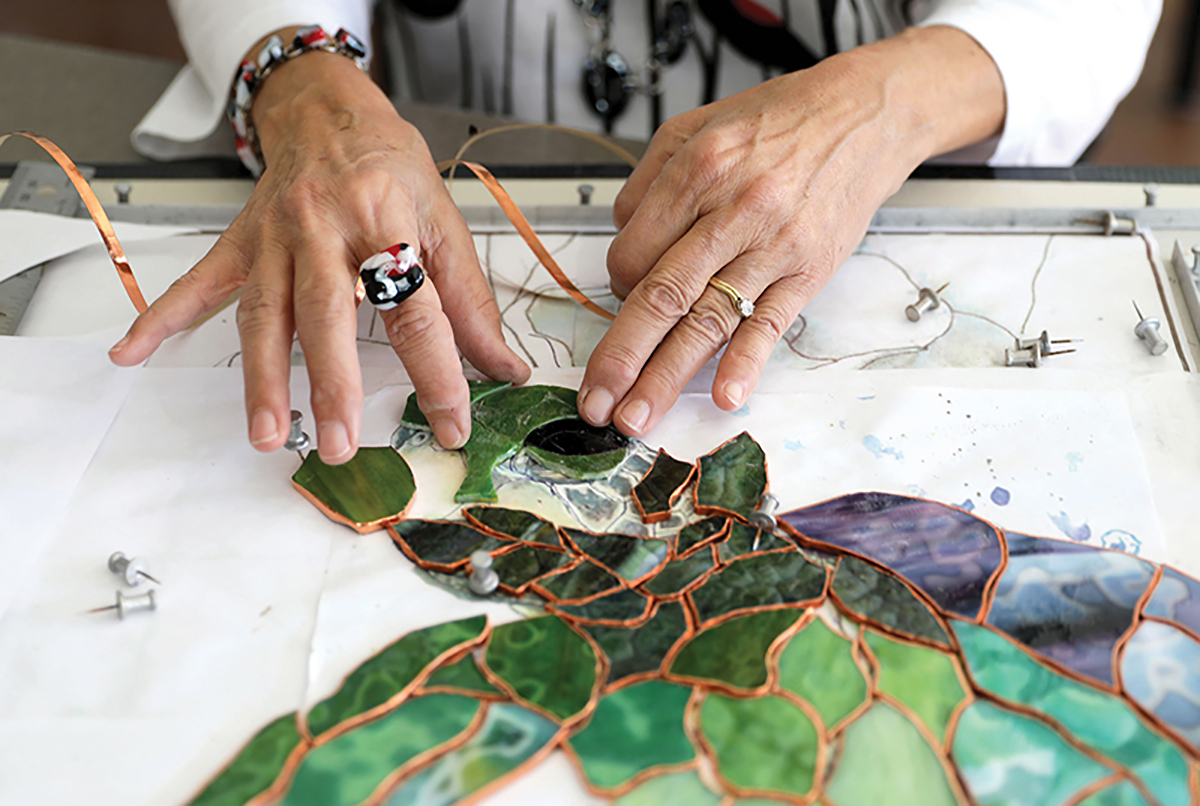 For students at Brunswick Community College’s Southport Center, art classes have been one way to stop the spread of loneliness and social isolation during a national pandemic.

Classes were offered in most of its programs, including pottery, painting, glass, jewelry, wood, photography, and music.

McFall says COVID safety protocols are being closely followed. Temperatures are taken at the front door. Masks are required. Cleaning is continuous. Social distancing is strongly encouraged, with only ten people (nine students and the instructor) in a class.

Registration for the spring semester remained strong in early December.

“We expect more than 250 students to start sixteen-week classes at Southport Center in early January,” McFall says. “More than 10 percent of these are new to us.”

In addition, a more limited late start schedule is available to those planning to take classes beginning in February (twelve weeks) and March (eight weeks).

Classes have proved to be a much-needed creative and social outlet for many of the students.

In a classroom at the end of a corridor at the Southport Center, GINA POPPE and JENNY BELLINI peer into a kiln, investigating the effects of a glass technique they’re trying out. Bellini, a former high school art teacher, is teaching at the center for her fourth year, while Poppe, who will teach her first class at the center in the new year, has taught private and adult glass classes.

DEBBIE RYAN has been taking glass classes at the center for two years and says it was different last fall.

“We used to be able to sit in a circle and do glass (projects) and see each other’s work,” she says.

Now workstations all face forward; students are masked. And, many in the class would gather after class to go to lunch and socialize, something they do less frequently.

“I couldn’t wait for classes to start. Even though we’re a little less social, we could still see other people, do something, create something,” Debbie Ryan says.

While some artists work on their craft at home, others find it difficult to do so, she says, adding that the center “kind of lights a fire to come to class and create.”

Ryan says her past group endeavors, which included delving into ancestry and quilting, have either stopped or are being worked on at home. These days, her social life is mostly limited to coming to class and going to church. 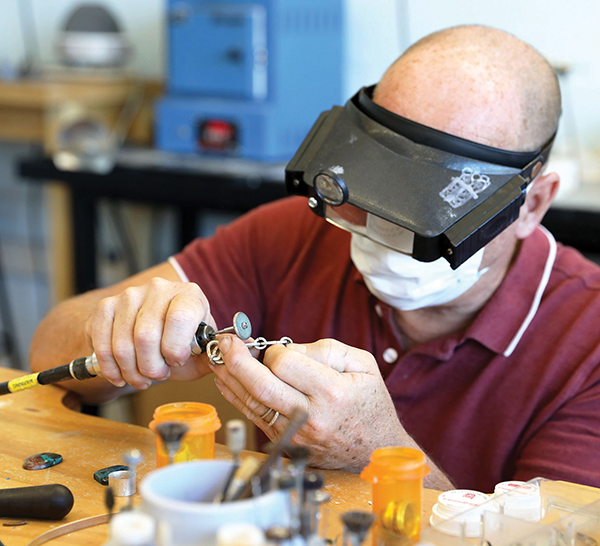 ART SMITH took Bellini’s glass class for the first time in the fall. In the past, he built furniture as a hobby, and when he moved here three years ago from Georgia, he didn’t bring the equipment necessary to continue to do so. It was an intentional decision; he was going to enjoy living at the beach, and he didn’t want to use space in his home for it. He’d wanted to study glasswork for several years, but he and his wife, ANGIE, traveled extensively.

With COVID nixing those plans, the pair signed up at the center and enjoy working on their glass projects in class and at home.

“I never thought we would be this far ahead,” he says of the projects Angie shares from photographs on her phone. “(Angie) and I have each made six pieces,” he says. 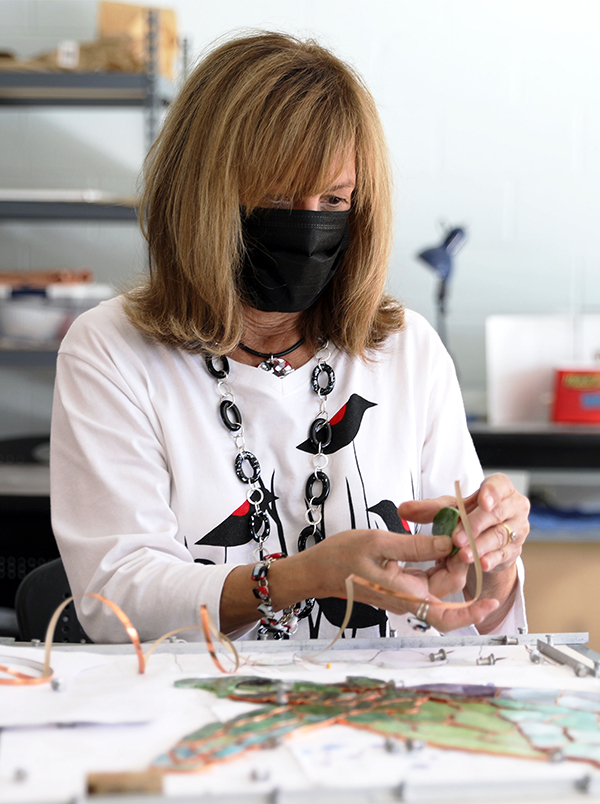 While Art’s always been a bit creative, Angie admits, “I never even liked to color as a kid.”

She’s had to remind Art that she’d never used tools before coming to glass. He, on the other hand, had plenty of skills he learned while making furniture that serve him well in glasswork.

SUE LILL has been taking classes at the center, including painting, pottery, and glass, for a few years. She’s excited to be in class, both to gain technical know-how and to get out there mingling with other like-minded creative people.

She’s currently working on a panel of poppies that will grace her front porch. She started it months ago but had to dismantle it when classes were halted for COVID. Some of her foil oxidized, and she had to redo some of it. She had considered reducing the size of the piece so she could finish it quicker.

But, based on her classmates’ advice, she decided to rework and rebuild rather than aim for a lesser version.

Dogged Pursuits: One on One