This year, for the first time, the Navy Week outreach event comes to the Port City.

The U.S. Navy picked Wilmington, along with thirteen other sites, to host visiting sailors and officials. The weeklong visit April 1-7 was scheduled to coincide with the North Carolina Azalea Festival, officials say.

“We’ve found that these exchanges have gone a long way for raising awareness of the Navy, expanding and strengthening community partnerships with the people we serve,” says Commander Linda Rojas, director of the Navy Office of Community Outreach.

A variety of outreach events are planned for Wilmington Navy Week, with between fifty and seventy sailors expected to visit.

STEFFANIE EASTER, director of Navy Staff for the Office of the Chief of Naval Operations, is slated to also visit. For more about Easter, check out the WILMA Weekly email April 2. 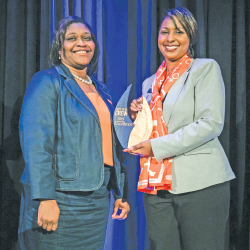 The awards recognized “excellence and leadership” in commercial real estate in the region.

CREW also handed out a Career Advancement for Women Award to the YWCA LOWER CAPE FEAR (above).

The organization “works to empower young women, eliminate barriers, and provide resources that allow women to become full participants in the economic mainstream of our community through the New Choices Economic Empowerment program,” officials say.

SEPI SAIDI, president and CEO of SEPI Engineering, and WILMA’s WOMEN TO WATCH LEADERSHIP INITIATIVE were finalists in the category. 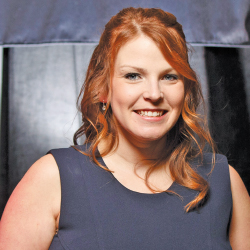 MEGAN BAILEY, of the CAROLINA ALE HOUSE in Wilmington, picked up a hospitality industry award this year.

The North Carolina Restaurant and Lodging Association gave Bailey its Restaurant Manager of the Year at the recent 2019 Stars of the Industry Awards.

“Each year, we host the Stars of the Industry banquet as a thank you to members of the hospitality industry that have demonstrated exemplary performance and dedication,” says Lynn Minges, president and CEO of the state association.

“We are proud to recognize members who continue to stand out amongst their peers and truly advance the mission of our organization.”

More than a dozen professionals from across the state were honored at the event, which took place at the Washington Duke Inn & Golf Club.

The North Carolina Restaurant & Lodging Association was established in 1947 and represents the state’s $23 billion restaurant, food service, and lodging industry.

Moser has served in the public health sector for thirty-six years.

The award was created by the North Association of County Commissioners and is implemented through the North Carolina Association of Local Health Directors. Officials say the statewide honor is given to an individual for “outstanding leadership in public health and community involvement.”

“It’s an honor to be recognized by your peers,” says Moser, who has been the county’s health director since 2011.

Moser started her career in the Madison County Health Department in 1982 as a public health nurse. She has also worked as a state consultant in the child health division.

County officials say that Moser has made a significant impact on health and human services since she came to Pender County.

In 2013, following a reorganization of departments, Moser was appointed the director of the newly formed Pender County Health and Human Services department.

She manages all programs provided by the health department and social services department. She also oversees the Pender County Animal Shelter.