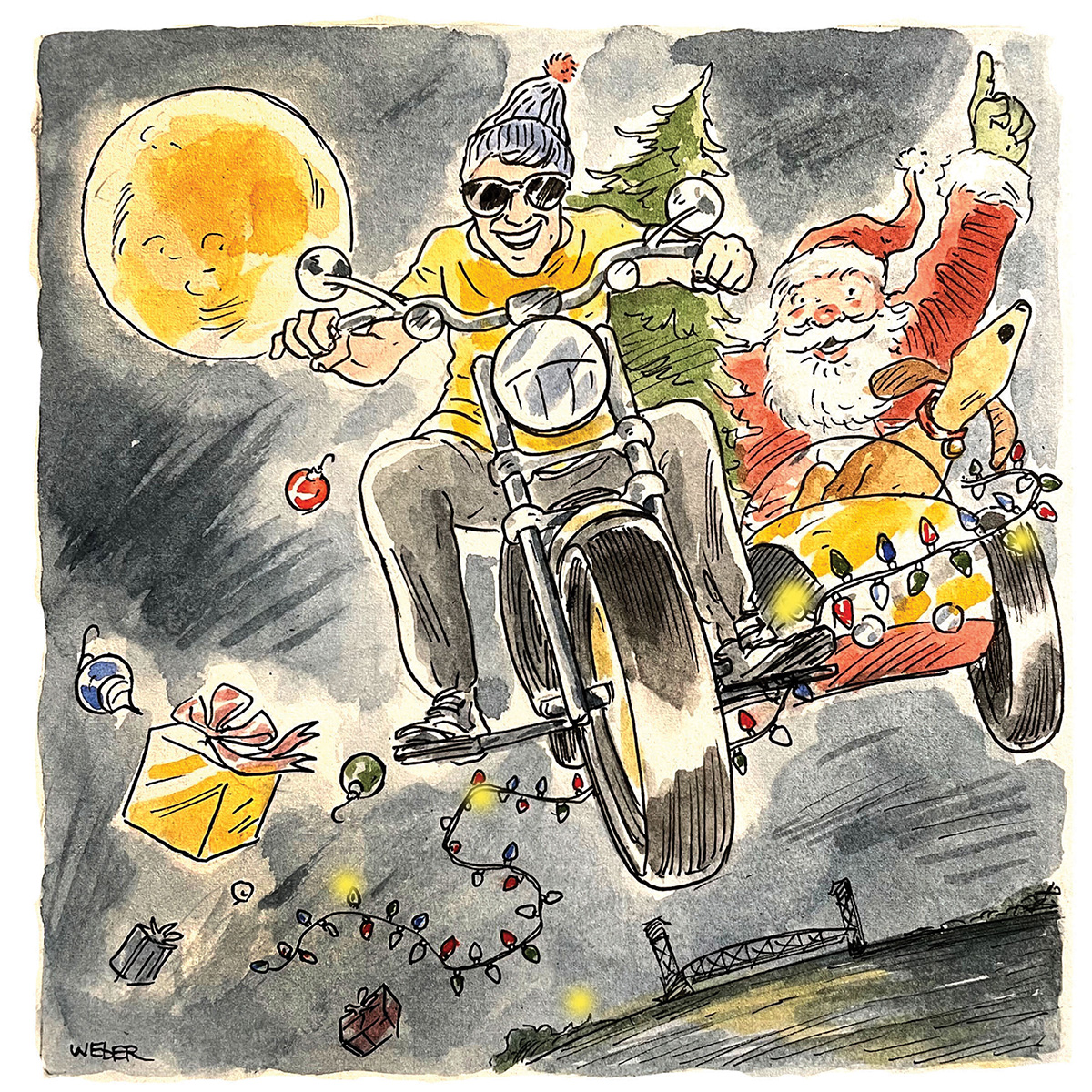 ’Twas a week before Christmas, and I was into the hooch.

Just one creature was stirring, my best friend the pooch.

No gifts had been purchased; the pantry was bare.

I hadn’t yet summoned the effort to care.

I was kicked back all comfy in my recliner.

A Christmas Story on TV thinking nothing was finer

Than chilling in my sweatpants and old T-shirt.

Then on the front porch, I heard a disturbance,

“What the hell,” I cried with grouchy perturbance.

I groaned as I forced myself out of my chair

I shuffled through the house with a grunt and a pout,

And opened the door just a crack to peek out.

When what to my wondering eyes should appear,

But a figure of light with a six pack of beer,

And not cheap beer either but hoppy pales ales.

I invited Chris in, and he felt right at home.

As I poured him a beer; his eyes went on the roam.

“No tree?” Chris asked with a look of disdain.

But so weak was my story that Chris saw right through.

“Get off your keister, get dressed, and let’s go.”

“But where are we headed?” I wanted to know.

“You’ll see,” the saint said not revealing his goal.

“While you shower, I’ll watch Flick stick his tongue to a pole.”

Ralph was a pink bunny as Chris and I left.

But missing the ending didn’t leave me bereft

Because out on the lawn was Chris’ magical ride,

Not a sleigh but a Harley with a car on the side.

“Cool bike, but how will it carry our load?”

He threw me the key and told me to drive,

He hopped in the sidecar and cried, “Look alive!”

As we roared down my street, Chris laughed with delight.

“Your neighbors have strung such beautiful lights!”

I was too ashamed to admit that I’d been oblivious

Or scoffed at such excess as silly and frivolous.

But with Chris’s help, the magic was shown

Of Walmart lights and artificial snow

My stupor was shaken, cynical no more!

“Let’s get a tree and gifts and more!”

Chris and I hit the stores still open that night

And even some closed and locked up tight.

He has a magic credit card that allows him to buy

Anything that encourages the Holiday Spirit

In those who are Scrooges and those who come near it.

We grabbed a wreath and an 8-foot Douglas Fir

And gifts for my dog and every kid, Ma’am, and Sir

In my family and ever family around.

As he dropped me at home and my feet hit the ground,

I heard St. Christopher call, as he roared out of sight,

AND TO ALL A GOOD-NIGHT!