Rebecca Allen on how lacrosse teaches girls empowerment and leadership 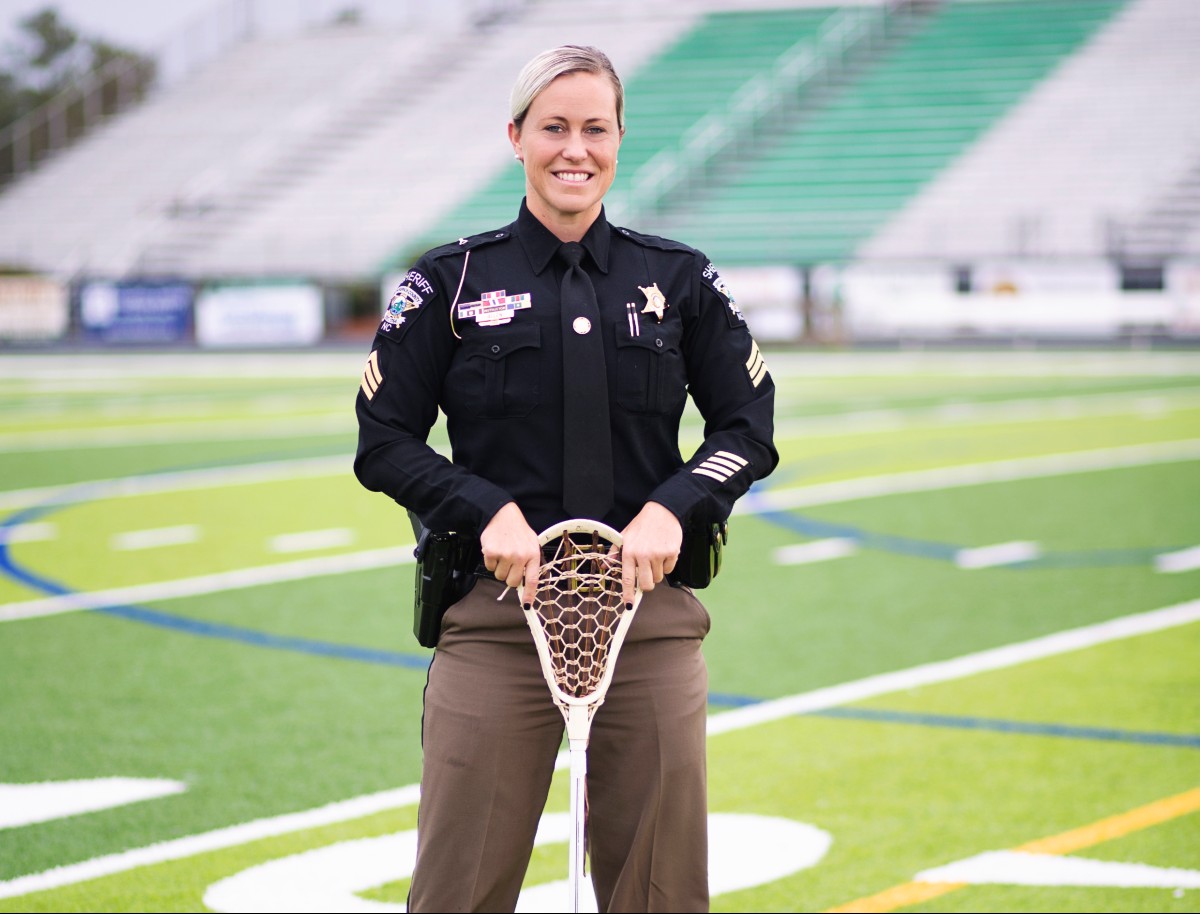 REBECCA ALLEN has been a law enforcement officer for twenty years. She’s also a seasoned soccer and lacrosse player and coach for nearly the same amount of time. Through her current position with the Brunswick County Sherriff’s Office as a sergeant, she is combining law enforcement with sports and the empowerment of women, making an indelible impact on her community.

Born in California, Allen moved to Oklahoma, home of her Native American relatives, when she was very young. The next family move was at age eight to Columbia, Maryland where she lived until college.

Looking back, Allen says, “My mom was my hero. She was a single mom and a strong woman. I admit I wasn’t always the best kid growing up. But I loved sports. My mom, however, believed in academics first. To play soccer and lacrosse, my grades had to be acceptable to her.”

Allen played point and coverpoint on the high school lacrosse team and sweeper on the soccer team. She also played on an Olympic developmental soccer team and an all-star lacrosse showcase team. In the winter she trained indoor track “just to say in shape” and, by the way, secured the county record for shot put for three consecutive years.

But it was lacrosse that she truly loved.

“Stickball, the origin of lacrosse, was played by many American Indian tribes and has always been near and dear to my heart. I am of Choctaw descent. Lacrosse is in my blood.” Allen played on an all Native American women’s team in Cherokee, North Carolina.

Similarly, it wasn’t by accident that Allen chose a career in law enforcement. Originally a student of religion, philosophy, and sociology at Barton College in Wilson, North Carolina, she gave up a scholarship to transfer to University of North Carolina at Pembroke. In 1998, two very close friends, one who was like a brother to her, were murdered at a resort while on spring break. Permanently impacted, she made a major career decision to study criminal justice. “It became my hope and my goal to keep other families and communities from going through what I did.”

Diploma in-hand, Allen was hired as a patrol officer in Asheville, North Carolina, three years to the day of the murder of her friends. Four years later, she transferred to Buncombe County where she worked with the special victims unit, narcotics task force, and was a school resource officer before being hired into Brunswick County’s drug task force.

“My current role is all about public education. My partner and I do a lot of education empowering the community to become more vigilant in the prevention of crime,” she says.

It’s this role that has enabled Allen to preach female empowerment. She is the coach for Brunswick County’s Wild Tide lacrosse team for girls in grades eight through twelve and assistant lacrosse coach for West Brunswick High School girls’ team.

“There is no better way to empower the next generation of strong women in this community than through sports,” Allen says. “The girls develop as athletes, support each other as teammates and learn what it means to work hard towards a common goal.”

Allen has a long list of what it takes to be a female police officer, too. Thick skin, a strong moral compass, strong personality, education and training, and ability to balance being caregivers and mothers with the demands of impartial and unbiased action. “Women must be very competent to be in this line of work. And you must have a true servant’s heart.”

Allen ends her workday by picking up her nine-year-old twin girls, Lila and Kama, from school. “We go straight to lacrosse practice. My girls participate in some of the drills. Next, we attend jiujitsu class before heading home, do homework, and feed all the living creatures in my house. That includes two dogs and a new puppy. Then pass out,” she says laughing.

Female empowerment is a top priority for Allen.

Allen spouts a long list of benefits for girls who play lacrosse including scholarships, time management, teamwork, common goals, and long-lasting relationships. “Lacrosse teaches young girls to take care of themselves and value their bodies,” Allen adds. She is a role model for fitness as a level 1 CrossFit trainer.

“Society tells women of all ages who they are supposed to be and what they are supposed to look like. Every woman should find confidence to blaze her own trail, not mold into something they are not meant to be,” she says. “Through sports and positive female relationships, women can feel comfortable to decide who they want to be.”