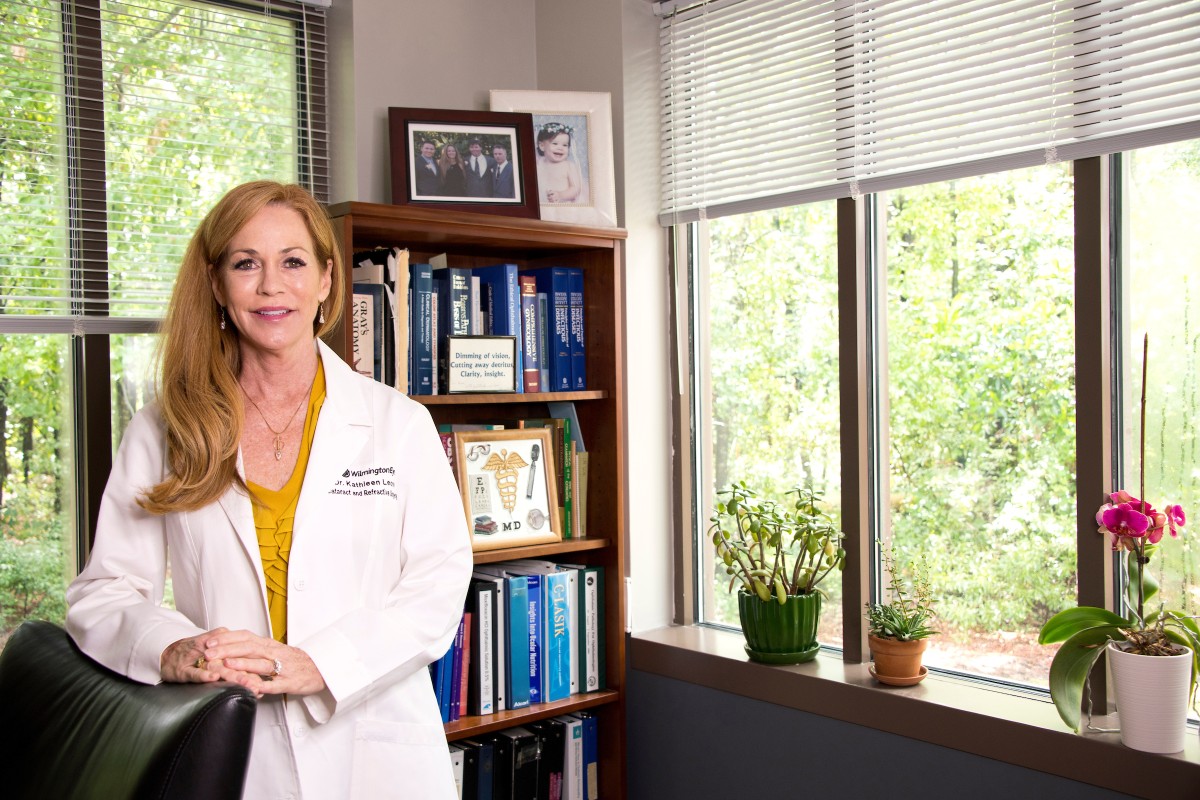 KATHLEEN LEONE knew at a young age she was destined to be a physician. Now a board-certified ophthalmic surgeon with Wilmington Eye, Dr. Leone credits the U.S. Navy in helping solidify her career path.

Leone attended Georgetown University in Washington D.C. where she majored in biology. Much of her undergraduate degree consisted of conducting research. “I thought I wanted to work in a research lab,” she says.

After three years at Scripps Research in California, Leone wanted to interact more with people so she started medical school at Georgetown.

“I was still paying for my undergraduate degree and I did not want astronomical student loan payments,” she says. Leone researched military scholarships, applied to the Army, Air Force, and Navy, and accepted with the Navy. “I knew I wanted to be at a duty station by the water,” she says with a laugh.

In exchange for a fully funded education, Leone agreed to serve as a Navy physician one year for every year of participation. After graduating from Georgetown, she completed a one-year internship at Bethesda Naval Hospital, now known as Walter Reed National Military Medical Center. She then served two years at a duty station in Guam. As the only physician on a base comprised of 1,200 personnel, she held regular medical hours and also worked in the emergency department at the main hospital.

“It really gave me the chance to hone my general medicine skills,” she says. Leone also accompanied patients who needed specialized care to be flown to Tripler Army Medical Center in Hawaii.

“It’s about an eight-hour flight via a C-130 aircraft. It’s loud, so listening to a heart rate or measuring blood pressure was challenging,” she says. “But it was so rewarding.”

In medical school, Leone enjoyed exploring various specialties. “I would finish a rotation and say ‘I want to do that.’ My last rotation was an elective and I did ophthalmology. Ophthalmology gave me the chance to bring all of those specialties together. I can work with patients of all ages and help fix a problem. That’s very satisfying,” she says.

Leone also wanted to see patients in an office setting and perform surgery. She returned to Bethesda Naval Hospital for a three-year residency in ophthalmology.

“The training was exceptional. Bethesda is the hub of Navy medicine and the National Institutes of Health is across the street. I was exposed to unusual and difficult cases, infectious diseases, and trauma.” After residency, she spent the last two years of her military career at Camp Lejeune in Jacksonville, N.C.

Leone started private practice in Wilmington in 1998. In 2000, she joined Wilmington Eye where the combined team of ophthalmologists and optometrists provides the most comprehensive vision care.

“As ophthalmologists, we work in unison with our optometrists. We couldn’t do what we do without them.” she says.

Leone credits her military experiences and the leadership of Wilmington Eye CEO Kathy Erickson for her success.

“We have a group of partners who are forward-thinking, motivated for growth, and want to serve the community at large,” she says.