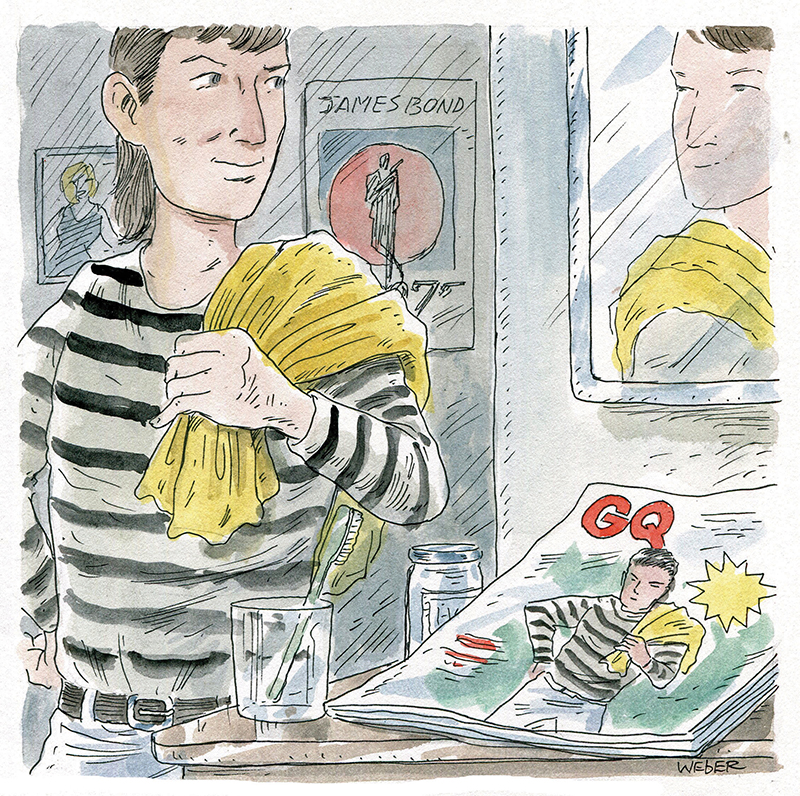 I bought my first copy of GQ (Gentlemen’s Quarterly) when I was twelve because I figured it was the kind of magazine James Bond would read.

I studied the pages for how to be a fashionable man of the world. As a suburban adolescent, I had few models for Bond-like cosmopolitan style. My father was certainly no help. On weekdays, he dutifully wore the suits my mother picked out for him, and on weekends, he donned the traditional suburban dad uniform: polo shirt, khakis, and Topsiders.

But I knew that as he wooed international ladies, won hands of baccarat on the French Riviera, and saved the world from the likes of Goldfinger and Dr. No, 007 wouldn’t have been caught dead in a pair of Topsiders. So I ventured to the mall and searched the young men’s departments until I found a mannequin wearing an outfit similar to one I’d seen in GQ.

In the suburbs of the 1980s, preppy was fashion, but this mannequin wasn’t a prep. He wore two shirts (a striped over a solid) in muted pastel purples, browns, and pinks and loose-fitting, light gray pants. The whole ensemble had an early Miami Vice vibe. I desperately wanted it, so conjured my best Bond charm and persuaded my mom to buy me the entire outfit.

But when I showed up to school the next morning, my buddies, all in T-shirts and jeans, were aghast. What in holy heck was I wearing? And just who exactly did I think I was all of a sudden? Of course, they didn’t understand, I comforted myself, they weren’t the kind of men who read GQ. They were, like my father, ignorant of high fashion.

I also learned from GQ that style isn’t just about clothes. One photo spread featured the medicine cabinet of a well-groomed man. White toothbrush in a cut crystal glass. Silver cup neatly packed with cotton swabs. Fancy tubes of moisturizers, shaving cream, and emollient. I was struck by how absolutely paltry my father’s medicine cabinet was, the entirety of his grooming products consisting of anti-dandruff shampoo, English Leather aftershave, and soap on a rope.

My father, a physician and self-styled amateur comedian, referred to my new reading material as “GC” (the abbreviation, he explained, for gonococcus, the bacterium that causes gonorrhea). I took no offense because I was confident the men of GQ knew something he didn’t. GQ men had more particular and urgent needs and therefore required more rarefied and expensive products to fulfill those needs. The men of GQ (like the chauffeured devotees of Grey Poupon mustard and very unlike my father) had what is known as “discriminating taste.”

Eventually, I realized that James Bond actually wouldn’t read GQ. He wouldn’t have to. Bond is GQ. You never see 007 trying on pants or picking up shirts from the dry cleaner. Bond’s cosmopolitan style is effortless, but mine wouldn’t be. Staying on top of the latest fashions felt like way too much work. So I quit reading GQ.

But I still don’t wear Topsiders.